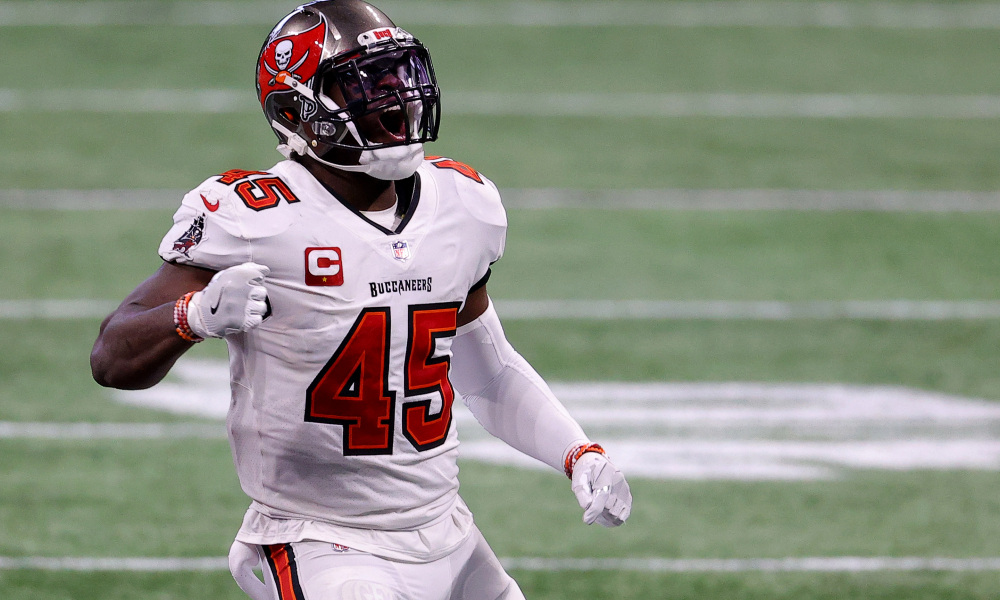 ATLANTA, GEORGIA - DECEMBER 20: Devin White #45 of the Tampa Bay Buccaneers celebrates sacking Matt Ryan #2 of the Atlanta Falcons for a loss of 7 yards on 3rd down during the fourth quarter in the game at Mercedes-Benz Stadium on December 20, 2020 in Atlanta, Georgia. (Photo by Kevin C. Cox/Getty Images)

The standard format of 1 QB, 2 RB, 2 WR, 1 TE, 1 (S)F, 1 K, and 1 DEF limits your league to one side of the ball for every game each week besides one. With Superflex becoming more and more popular each year, the QB position is the most important in both fantasy and the NFL. What is forgotten is that defenses win championships, but that is not the case in most fantasy leagues. IDP, or Individual Defensive Player, leagues create a whole new dynamic in FF. Yet, most leagues that incorporate IDP do not have their rosters setup for these defensive players to have real value, which defeats the purpose from transitioning from whole DEF to IDP.

For IDP, I would highly recommend going 2 DL, 2 LB, 2 DB, and 3 FLEX. I mentioned above that leagues with IDP have bad setups because often I see leagues that only use 1-3 IDP players, which removes any value they have. The more players that are rostered, the less players on the waiver wire, which means the value of the rostered players is far more significant. For example, leagues that have their lineups set for just 3 FLEX IDP (12 team league) have about 60 players that are rostered. Going to Fantasy Pros, this leaves guys like Danielle Hunter, Shaq Barrett, Tyrann Mathieu, Chase Young, and Leighton Vander Esch potentially on the waiver wire. Trading for IDP isn’t going to be a winning strategy when guys like these aren’t rostered. When you use the format I suggested, you are starting 9 players, and maybe have 1-2 guys in each position on your bench. So lets say, on average, teams are rostering 13 defensive players. That is 156 defensive players being rostered, and Fantasy Pros only has 153 players in their rankings. It may seem like a lot, but it adds significant value to guys like Devin White and Roquan Smith.

There are many different formats for IDP scoring, so it is important for either you as the commissioner or you as the team owner to understand the strengths and weaknesses of your scoring system. The IDP Guys have a great article that highlights the amount of points each format rewards. Leagues that are tackle heavy will make the top LBs extremely valuable. Leagues that have QB hits and sacks being rewarded the most will have EDGE and DT players being the lead IDP targets. And obviously, pass defend, interceptions, and return yard bonuses will have DBs being most valuable. Creating a balance between the 3 scoring systems is difficult and may not be necessary. Whatever scoring your league has, it is important for you to grab the guys that the format best fits. For instance, my league sees LBs scoring the highest amongst all IDP due to being in a tackle heavy league. Devin White, Darius Leonard, and Roquan Smith are all significantly more valuable that guys like Myles Garrett, Aaron Donald, Jalen Ramsey, or any corner for that matter.

The same feeling you get when you see your WR catch a TD or your RB take off for a 30 yard run is the same feeling you will get when your DL get a sack or DB gets a pick. You will hate seeing your RB being tackled for a loss until you see it is your LB. You will be researching depth charts and looking at snap counts to find the diamond in the rough, which is much more likely than finding the diamond on the offensive side of the ball.

Give it a try, trust me. It is a refreshing take on fantasy football that you won’t be able to leave.