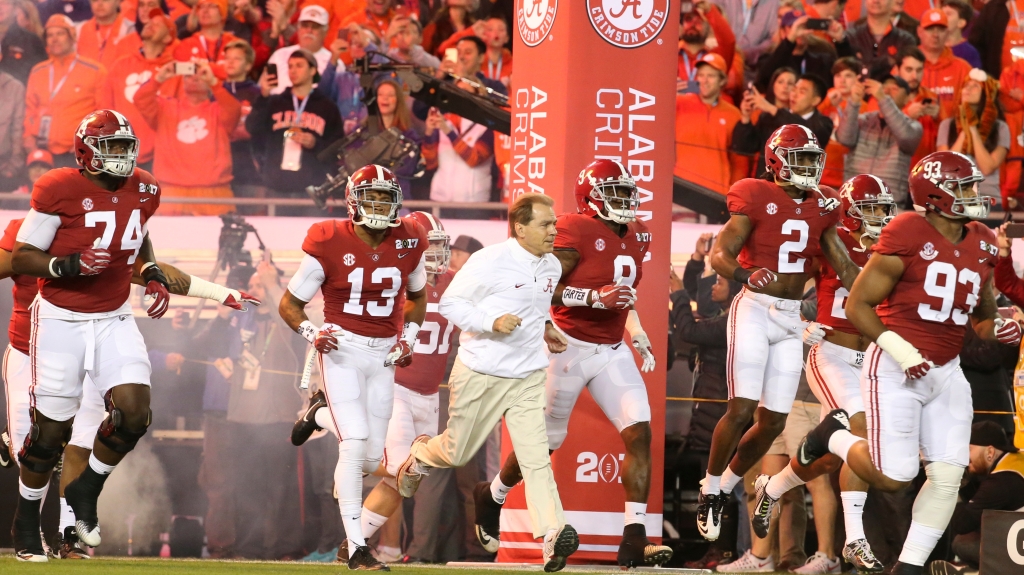 As we make our way into the 2019 season of college football, the CFP rankings currently sit as Alabama, Clemson, Georgia, Ohio State, LSU, and Oklahoma. Familiar teams continue their dominance, most notably Alabama and Clemson. This goes all the way back to when the College Football Playoff began in the 2014-15 season. Alabama has played in the playoffs every year. Clemson missed the inaugural playoff, but has made every playoff after. Oklahoma has made the playoff 3 of the 5 years. These three teams are seemingly dominating their respected conferences and schedules with relative ease. Sure, they may have a game each year that goes to the last few minutes or OT, but they always prevail. Then you have the likes of Ohio State and Georgia who always get so close, yet OSU has made the trip twice and Georgia once. So what gives?

If you go back and look at who has been dominating the recruiting game, it’s easy to guess. From 2016 to 2019, Alabama has 58 Five Star recruits, Georgia has 47, Clemson has 26, Ohio State has 34. Now if you look at a team like Michigan, they have 12. Notre Dame has 2. Florida has 8. The drop off is incredible. Now, people like to come back with the argument of having four and three star recruits. Sure, let’s have that argument.

The disparity is clear. Then the question becomes, why is this happening? Well, as I mentioned before, who has been competing for National Championships? Kids want to win rings, and they are going to the schools that are giving them the best chance to. With a four team playoff, there are not many teams to pick from. As you can see, Alabama and Georgia are the top teams in the SEC, Ohio State is the best team in the B1G 10, and Clemson is a sure winner of the ACC.

Then we look at which teams are putting players in the NFL. In the 2019 NFL Draft, Alabama led the country with 10 players drafted, Ohio State being second with 9 players, and fifth being Georgia with 7. As far as conferences go, SEC is dominating recruiting, which in turn, the SEC is dominating the draft year in and out with 64 players being drafted last year alone. The numbers speak for themselves.

Is there a problem with this? Alabama has created a dynasty. Clemson may be creating a dynasty. Georgia is giving Bama a run for their money. Ohio State looks like the best team in the country, and has been the best team in the B1G 10 the last few years. Oklahoma has nobody keeping up with them in the B1G 12. With these trends continuing, I don’t see much of these teams dropping out of the playoff race. Rather, I think they will just continue to grow putting themselves into a whole other tier of college football, leaving the “have-nots” playing for nothing. Is this discouraging? Sure. Is it fair? I don’t see what’s wrong with the principles of this. This is the consequence of giving the people what they wanted, the college football playoff.

If there was to be a solution to this, it would have to be an expansion in the college football playoff. Moving to 8 teams would allow for recruits to have a better chance of getting their ring, while being on a team that they have an immediate impact. These five star recruits are waiting an extra year or two to see the field because the five star recruits at their position from the year’s prior are in their spot. Some people have been proposing that expanding to a 12 or 16 team playoff would be even better, but then it becomes teams are playing that don’t belong. If the playoffs were to start today, would people really want to see a game between #1 Alabama vs #16 Boise State. I mean, let’s be honest, the spread would be about 31 points. With an 8 team system, we would be looking at #1 Alabama playing against #8 Wisconsin (Jonathan Taylor). That would be far more interesting, especially seeing how JT handles himself against a stout Alabama defense.

My case is that disparity in college football is a reality. These broadcasters and analysts that are saying that the amount of 5-star recruits a team has compared to another doesn’t matter are absolute idiotic. The same teams are landing the big name recruits, and these same teams are playing in January. I just want to bring to light that recruiting is a big factor in how teams are playing, coaching aside. It’s easier to go out on the field on Saturday with a 5-star team than it is coaching up a team of 3-star players. Of course not all five stars pan out, but I’m not considering the outliers because, well, they are outliers. The college football system is among the most exciting brand of sports, but the disparity is making the game predictable and repetitive.