While doing the Top 10 Running Backs and Wide Receivers, I struggled with the lists because of how much talent there is in college in those positions. While making this list, I found that the top 3 QB’s are no doubt in my mind. However, after that, no QB really gave me the definite, concrete evidence on why they are top 10. I did not include QB’s that are going into their first starting season because they do not have tape for me to really judge. At the end of the season, I do expect Justin Fields and Jacob Eason to crack the top 10. Let’s get into it.

D’Eriq King comes in at the 10 spot after an incredible first season at Houston. Throwing for 36 touchdowns and rushing for 14, King might be the best dual-threat QB in college. King has a chance to solidify himself as a top QB this year when he opens the season against Jalen Hurts and Oklahoma week 1. I expect that game to be the typical, exciting, high-scoring game that all fans need and love. Week 1, Houston vs Oklahoma, get ready.

Stanford is coming off an 8-4 season with a bowl win against a tough Pittsburgh team. Leading this is QB KJ Costello, who threw for over 3,500 yards and added 29 touchdowns with that. The problem I see with Costello is his 11 interceptions. Costello is a 2020 NFL prospect, so I’m expecting him to bring those interceptions down. With Whiteside now playing on Sundays, Costello needs to find a way to lead Stanford past a tough schedule.

Mason Fine is heading into his senior season at North Texas with almost 10,000 yards under his belt. He’s been the CUSA Player of the Year for the past two seasons, and has only progressed forward. Look for Mason Fine to have a terrific year, with NFL scouts eyeing him. A 4,000 yard season with 35+ touchdowns is expected, and I think will be the bar for Fine.

Out of everyone on this list, everybody’s job is relatively safe. Shea Patterson, on the other hand, must deal with two promising QB’s behind him on the depth chart, Dylan McCaffery and Joe Milton. Patterson’s numbers do not jump off the sheet, but, with Josh Gattis now leading Michigan’s offense, I’m hoping, as all Michigan’s fans are, that Patterson lights it up this season.

When talking about dual threats, Sam Ehlinger is in that conversation. Over the last few years, critics have talked about whether “Texas Football” is back. Well, Ehlinger has made Texas relevant again. In 2018, Ehlinger threw for nearly 3,300 yards with 25 touchdowns and 5 interceptions. Along with that, Ehlinger rushed for 480 yards and 16 touchdowns. Texas and Ehlinger’s true test this season will be week 2 when LSU comes into town. 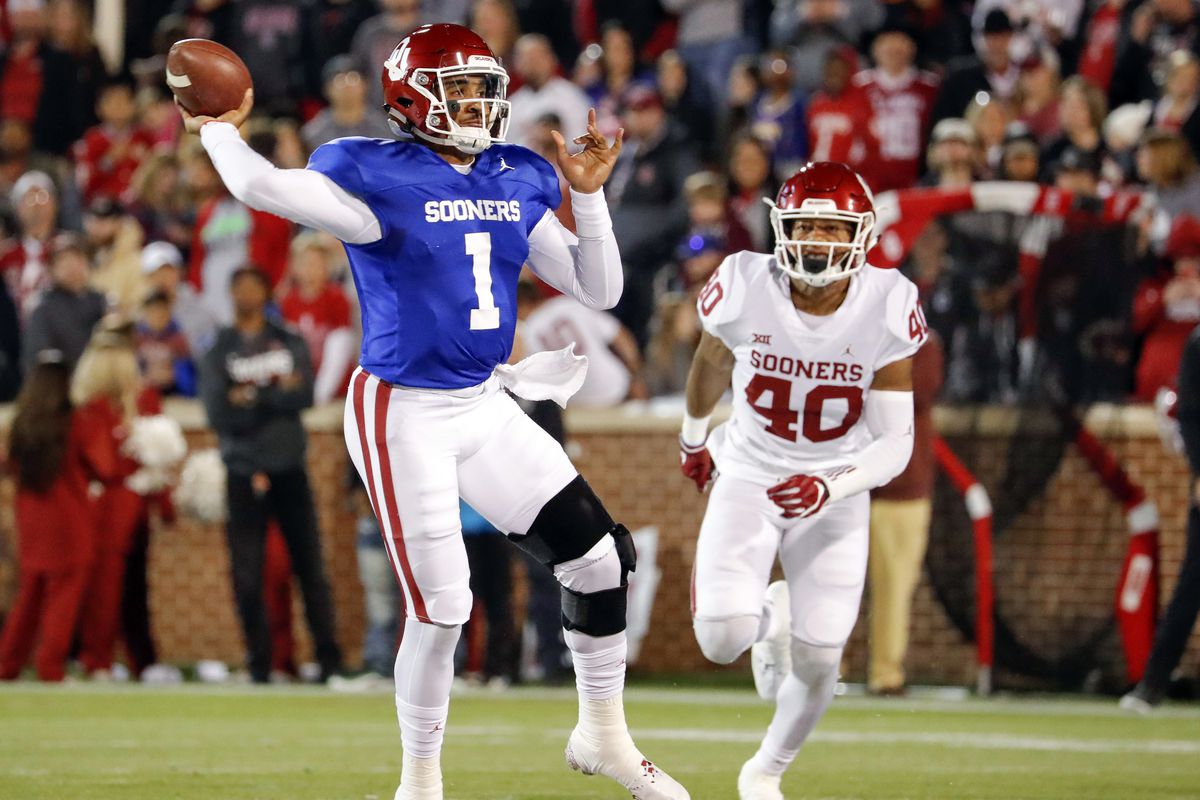 What a roller coaster Jalen Hurts and his story has been over the course of his college career. He went from being the 2016 SEC Player of the Year and leading the Crimson Tide to two national championship games (2016 & 2017) to being benched in the 2017 National Championship, to then end up transferring to Oklahoma. This story is one that I will be most intrigued with this season, just because I want Oklahoma to take down Alabama because of this whole situation. Hurts has some big shoes to fill as well, with Baker Mayfield and Kyler Murray being the last two QB’s that have played for Oklahoma.

Jake Fromm broke out during his freshmen season, leading Georgia to the National Championship. Many believed he would be the next face of college football, and although he has not played poorly, he hasn’t been what everyone once believed. Regardless, Fromm is still a top 5 QB, with a Georgia team that should make some noise in 2019. Look for Fromm to make or break his NFL draft stock this season.

Justin Herbert may have been the number one overall pick if he would have entered the 2019 NFL Draft. However, Herbert decided to return to the Oregon Ducks with hopes of leading them to the title game. Physically, Herbert may be the most gifted of all NFL Draft prospects. However, he needs to improve his completion percentage and interception rate to really bring this Oregon team to the next level.

Here is what is going to bring the argument to the table. Lawrence vs Tagovailoa. At first, I had Lawrence ahead of Tua, no questions asked. That’s just from what I watched during last year’s national championship game. I think Lawrence is a heisman favorite this year, and he will lead Clemson to another national championship. He threw for over 3,000 yards with 30 touchdowns and only 4 interceptions. Along with this, he is returning Tee Higgins and Justyn Ross to his weaponry. This offense has the possibility of being an all-time great unit.

Tua Tagovailoa is the best QB in college. He was just shy of throwing for 4,000 yards last season and added 43 touchdowns to that number. It’s easy to hate Alabama, and I love seeing them down, but I can’t bet against Tua. He throws to three of the best college receivers in the nation. Me saying that should take away some sort of acknowledgement because it could be said that they make him look better than he is, but I think that Tua would excel with anyone catching his ball. The Tua vs Lawrence argument is going to be a fun thing to watch.